There's a ton of poker time software out there and even some nifty looking dedicated hardware. At the games I attend we'll usually use a computer for the timing, but often there isn't one in the room and no one wants to bring over a laptop. However, there is almost always a TV with DVD player in whatever room gets temporarily re-purposed as the game room.

That got me thinking that a DVD that could serve as a poker timer would work in all the rooms in which we play poker and would offer these other benefits:

Tournaments often last four hours or more, but a DVD can hold that much video using a variable bit rate encoding so long as the image doesn't change a great deal, and a simple count-down timer image wouldn't change very much at all.

The elapsed time per round, round number, and time remaining in the round would all be numbers on the video display, but the actual blind values, which tend to differ from tournament to tournament, would be best contained in the closed captioning track.

DVDs can contain zero or more closed captioning tracks each of which contain screen location information and text which is overlaid on the video. Putting different blind levels on different tracks allows the tournament director to easily adjust the blinds to whatever he or she prefers.

Creating the DVD would be a simple matter of transcoding computer output into a variable bit rate DVD-ready video stream. The computer output time display could be easily created using simple computer graphics programming, flash, or even javascript and HTML.

I suspect if someone took the time to put together such a DVD it could be sold in poker stores, game stores, and online for way more than the less-than-a-dollar production cost. Go do it, and I'll buy one.

It looks like someone did start making something like this (before I posted). Their implementation looks very nice: http://www.homeseriespoker.com -- Ry4an

When editing source files checked out from CVS I sometimes want to prevent them from going back in to source control without further edits. Until now I've just used // FIXME comments and have tried to remember to grep for FIXMEs before committing the files back.

Problem is others use FIXME comments, and sometimes I forget to grep. So I've tweaked our CVSROOT files to prevent custom FIXME tags from going in to source control.

I appended this line to CVSROOT/commitinfo:

Added this line to CVSROOT/checkoutlist:

Now when I put a // FIXME RY4AN comment into a source file commits break until I remove it.

SwarmStream Article on the O'Reilly Network

I wrote an article that got posted on the O'Reilly Network. It sounds a little more huckster-ish than I'd like, but the tech does get explained pretty well. There's a link to the new beta 2 release of SwarmStream Public Edition at the bottom of the article.

SwarmStream Public Edition is a scaled-down version of our commercially-licensable SwarmStream SDK. Both systems are designed to provide networked applications with high levels of reliability and performance by combining commodity servers and cheap bandwidth with intelligent networking software.

Using SwarmStream Public Edition couldn't be easier, you just set a property that adds its package as a Java protocol handler like so:

So, if you're doing any sort of HTTP data transfer in your Java application, there is no reason not to download SSPE and try it out with your application. There are no code changes required at all.

Jetty is a great Java servlet container and web server. It's fully embeddable and at OnionNetworks we've used it in many of our products. It, however, has the same 2GiB file size limit that a lot of software does. This limit comes from using a 32 bit wide value to store file size yeilding a 4GiB (unsigned) or 2GiB (signed) maximum, and represents a real design gaff on the part of the developers.

Here at OnionNetworks we needed that limit eliminated so last year I twiddled the fields and modified the accessors wherever necessary. After initially offering a fix and eventually posting the fix it looks like Greg is getting ready to include it thanks in part to external pressure. Now if only Sun would fix the root of the problem.

I got sick of having to edit the launch file whenever I ran my Poker Timer (https://ry4an.org/unblog/msg00038.html), so I wrote a quick CGI that generates a JNLP file which launches the app with the specified settings. You'll need to have a 1.2 or higher Java Virtual Machine installed (http://java.com).

So we've got a Perl interpreter dynamically producing a JNLP file that tells a Java Virtual Machine what to do. Talk about an unholy alliance.

The timer can be run at:

Some friends and I have been playing poker a couple of times a month for the last year or so. Our play is terrible, no one cares, and we usually spend more on beer than we win. It's a good time.

In November a few of us decided to head to the local card club and try our hands at play in the wild. We decided to enter a tournament. Tournaments are a great way to start out playing at a card club because you know going in exactly how much money you're going to loose from the start. Ninety or so people each pay a fixed entrance free, and only the top nine of them get any prize money at all. Tournaments all offer good initial chip parity -- everyone starts with exactly the same amount of money so you can't be pushed around by bigger stack from the start. Another added bonus is that for your initial buy-in of twenty or so dollars you get a few thousand "dollars" in tournament chips. They're not real money but they're the closest I'll ever come to saying, "I raise 2000," without having to append, "pennies."

The tournament was great fun and though none of us made it into the top 50% of finishers we really liked the betting structure. The tournament was divided into twenty minute rounds each of which had their own amounts for the blinds (like antes) and minimum bets. The constantly escalating financial pressure encouraged aggressive play and ensured a timely conclusion.

Last night the friends were coming by for poker again and wanted to play tournament-style, but we couldn't find any tournament round display software for download. I ended up writing a quick and dirty one poker timer that allows for the display of progressive round values. I would have liked to have displayed it through the TV but lacked the right cables so we just set a laptop where everyone could see it. I've attached the Java source, binaries, and a screenshot. 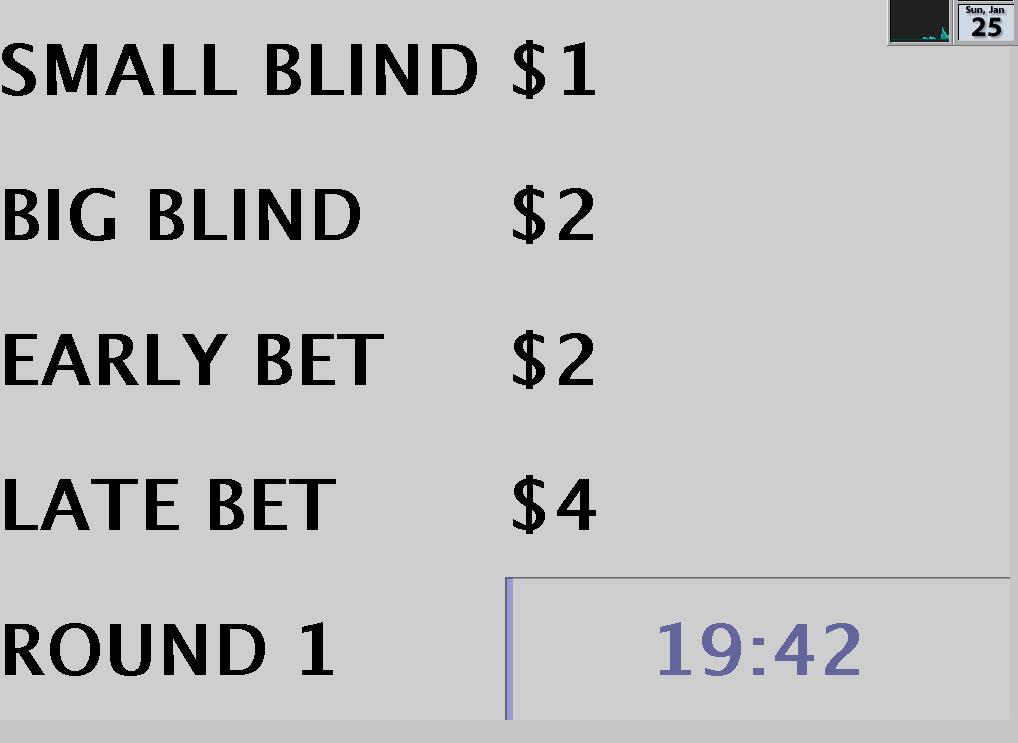 I try to lead a very uncluttered life whether one's talking about hard drive layout, personal responsibilities, or physical clutter in my condo. Three years ago I got my first TV and DVD player. Each came with its own remote control. Not wanting to deal with two remotes on my coffee table (which at the time was a cardboard box) I went out and bought a nice $20 universal remote that was very programmable and easily handled the functions of both the TV and the DVD player.

Since then I'd added a TiVo and a VCR to the mix and the old remote just wasn't cutting it. Looking through Remote Central (http://remotecentral.com) it looked like my options were cheap remotes with fixed buttons whose labels would never match their assigned functions or ungodly expensive remotes with touch screen buttons and programming software run on one's computer.

Finally last week after the release of the brand new TSU-3000 remote, the price of a refurbished TSU-2000 (four generations older) dropped into my price range. The TSU-2000 (http://www.remotecentral.com/tsu2000/) has a few hard buttons around the edges for the functions you want to be able to use without having to look at the remote (volume, pause, etc.) and a large touch screen area in the center for everything else.

Reading reviews for the TSU-2000 shows that owners are divided into 2 categories: those who are geeks and those who find the remote unacceptably difficult to program. Everything about the remote is user-definable from the location and shape of the buttons to the screen transitions to the pitch of the beeps.

The software it comes with, ProntoEdit, is (I'm told) terrible, but it only runs on windows. I found a Java implementation called Tonto (http://giantlaser.com/tonto/) which has worked wonderfully thus far. It probably took a good 20 hours for me to get my remote to the point where my configuration handles most of what I need it to do, and even that was with liberal use of other peoples' graphics. Is the flexibility worth the time investment? Probably not for most people, but still there's something nice about being able to make the commercial skip button on the TiVo as big as a quarter. 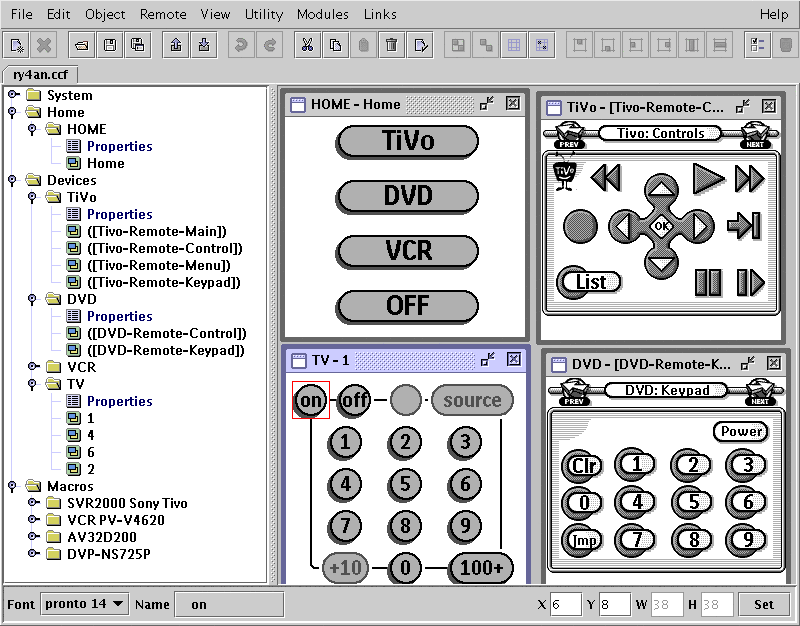