Cheap Ass Games (http://cheapass.com) make a lot of great games which are available for very little money. A perennial favorite is Kill Doctor Lucky which is sort of like Clue, in reverse, and with a better sense of humor. It's an easy game to learn from the rules, but no one wants to read the rules. I've found that putting this turn sequence diagram I whipped up in front of a first time player augmented with a quick explanation of killing and failure is enough to get someone from zero to playing in 30 seconds. Maybe the computer geeks with whom I hang out are more into state diagrams than the general populace, but it works for us.

The attached image shows the diagram. The attached archive contains the source diagram, a .pdf version, and a the same image. 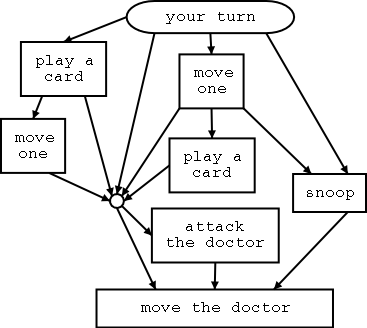 Sometimes the best things to use are the simplest ones, this works perfectly and takes any guesswork out of the equation for a new player. Now if I only one of the for my life, that would be truly useful! -- Louis Duhon

Dude, we made one for your life... it's blank -- Gabe Turner